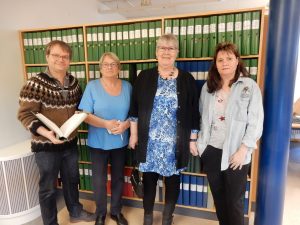 Anneli Andersson has been doing genealogical research since

1988, and has worked at the Mellerud museum and genealogy archive in Dalsland for 20 years. At the archive, she assists visitors with their research, and has taught classes in genealogy. Anneli is experienced in helping North Americans to find their Swedish roots, and has assisted them in locating where their ancestors lived and where they are buried. Anneli has been a  participant in SwedGenTour since the start in 2002. Member of Vasa Order of America.

Anna-Lena Hultman has been doing genealogical research for more than 36 years and is well-known as an expert on emigration research. Her home province is Västergötland. She was one of the key persons in the development of the Emibas CD, a CD with information on more than 1.1 million emigrants leaving Sweden between 1845 and 1930. She also guides many North Americans during the summer months in locating their ancestors homesteads. Anna-Lena has been a participant in all the SwedGenTours.

Charlotte Börjesson has been doing genealogical research for more than 16 years and has deep experience with both Swedish and American resources. She is a former board member with the Computer Genealogy Society of Sweden (DIS) and her areas of expertise include research within in western Sweden as well as computer genealogical research and photography. Charlotte has participant in SwedGenTour since 2002. Member of Vasa Order of   America.

Olof Cronberg has since more than 30 years extensive experience working with both Swedish and American genealogical resources. He is the former president of Computer Genealogy Society of Sweden (DIS). He has developed the Swedish genealogical database, Disbyt. His ancestry is from across Sweden including priests, craftsmen, merchants, soldiers, some nobility and of course peasants. Olof has participated in SwedGenTours since 2002

SwedGen is a group of Swedish genealogists who tour the United States for the sole purpose of helping Swedish-Americans learn more about their heritage. The group has successfully helped individuals get started with their research and helped break down many brick walls. 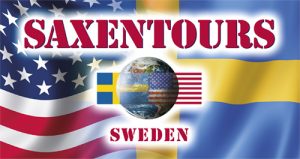